“It is our sincere hope that at least some of the information can be used to better understand suicide in New Zealand and help to identify useful preventative measures,” said Mike King, Founder and Ambassador to the Key to Life Charitable Trust.

“Letters and communications were voluntarily submitted by those affected by the sensitive issue of suicide or suicidal loved ones and were analysed to find practical answers as to why so many New Zealanders are taking their lives, to use the research to inform future interventions and suicide prevention efforts,” said Mr King.

All letters and communications were treated like the treasures (taonga) that they are.

This was not a scientific or academic piece of research in its purest sense. Rather, it was an attempt to understand the people whose final communications have been provided by families who responded to calls to participate in the 1000 Letters project and importantly to look for common themes and distil any trends or triggers from the material.

“The research does not provide a definitive answer, but we hope some clues and themes will emerge that can guide strengthening intervention protocols and suicide prevention efforts in New Zealand.”

The impact of suicide on those left behind is strong and lasting. Some reported that few resources were available to support them and that they felt they had to deal with their grief alone.

Many wrote that death by suicide does not prompt official or community support in the way that death through injury or illness does and that there is sometimes an additional layer of guilt and blame that makes the death even more difficult.

More than a third of contributors spontaneously said they were grateful to be able to share their story and create a picture of the person who died. Many described ongoing emotional pain, grief and their own suicidal thoughts in the wake of the death.

People contributed letters and stories and information primarily in the hopes that other people could be spared the same pain they went through. Many felt isolated from regular channels of support and that they wished they had better access to services to help them deal with the grief.

“We do not claim this is an exhaustive or representative study, nor are we instructing professional bodies what to do or how to behave. This research is intended to be the starting point of a conversation for suicide interventions and prevention in 21st century New Zealand,” Mr King said.

Key Points from the 1000 Letters Project

Most people said that they contributed the letters and supplementary material because they hoped the information could be used to identify and help people at risk of suicide and thus also prevent the pain and loss associated with it. Participating in the project and writing about the loved one who died seemed to serve another purpose: to affirm that person’s humanity and story as more than just another suicide statistic. Finally, many also said they wanted and needed to express how the suicide affected them, those left behind.

The researchers who undertook the study cannot claim they fully understand any writer, much less the entire group of people who attempt or complete suicide. However, their experience working with qualitative data professionally for more than 20 years allowed them to confidently stand behind the themes identified as being relevant to the people into whose lives they were granted a small and imperfect viewing window.

Key Themes from the 1000 Letters Project

Impulsive suicides were the exception, not the norm. Most who wrote about their reasons described months, years, or even decades of issues that contributed to their final decision, even if that decision seemed sudden to others.

Love was not enough. Writers knew they were loved and they reciprocated that love. Having love could became additional evidence that there was something wrong with them and a source of guilt. Loving relationships and not wanting to hurt others could postpone a suicide, but not prevent it.

People did not want to die; they wanted the pain to stop. They were hurting and exhausted from the ongoing struggle of being themselves and wanted peace and a cessation of pain. Many wanted to stop hurting people they loved and felt that their absence would eventually be better for those people.

A suicide affects everyone. Any death and loss causes grief; in the case of suicide this grief was often complicated by feelings of guilt, blame, and social stigma. Resources to help those left behind were often said to be inadequate or even non-existent.

You can download a copy of the report here. 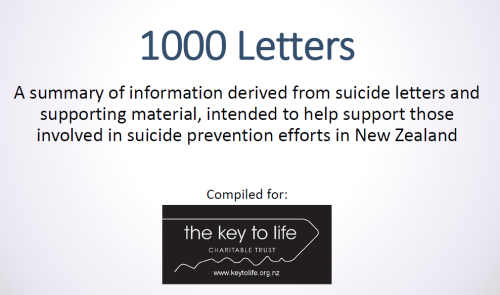